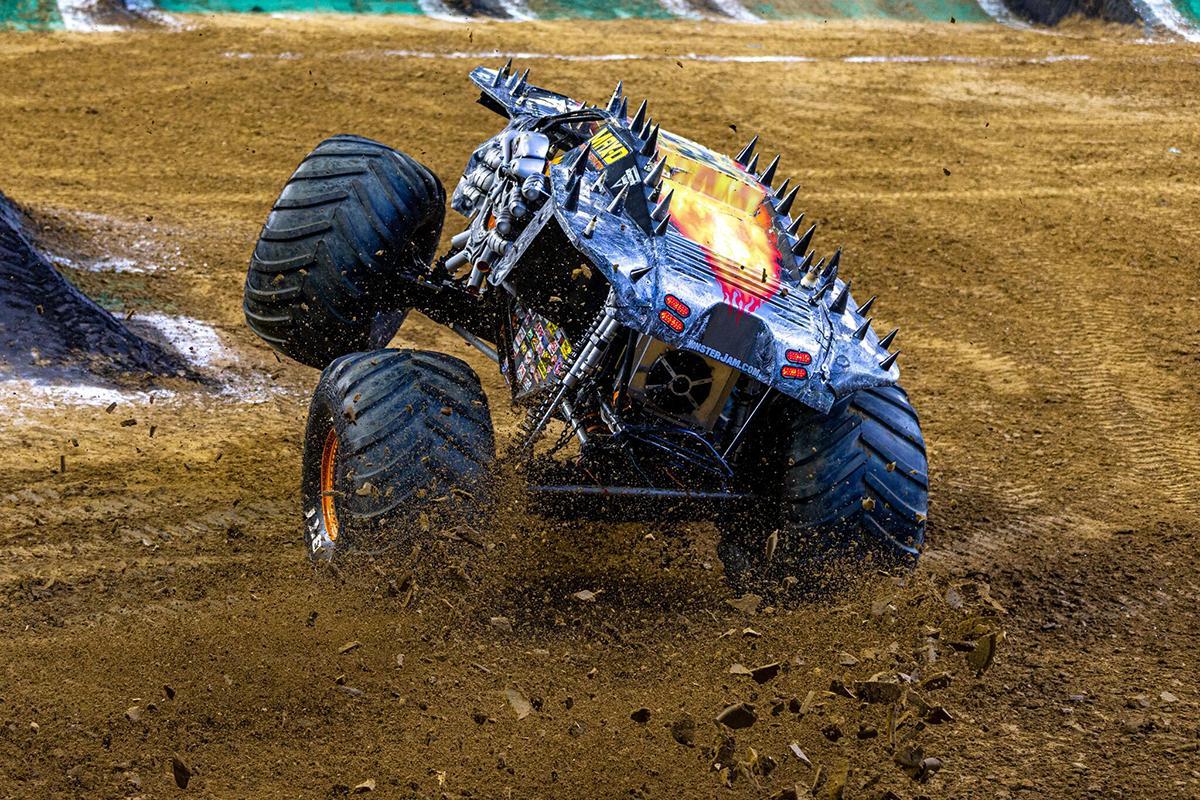 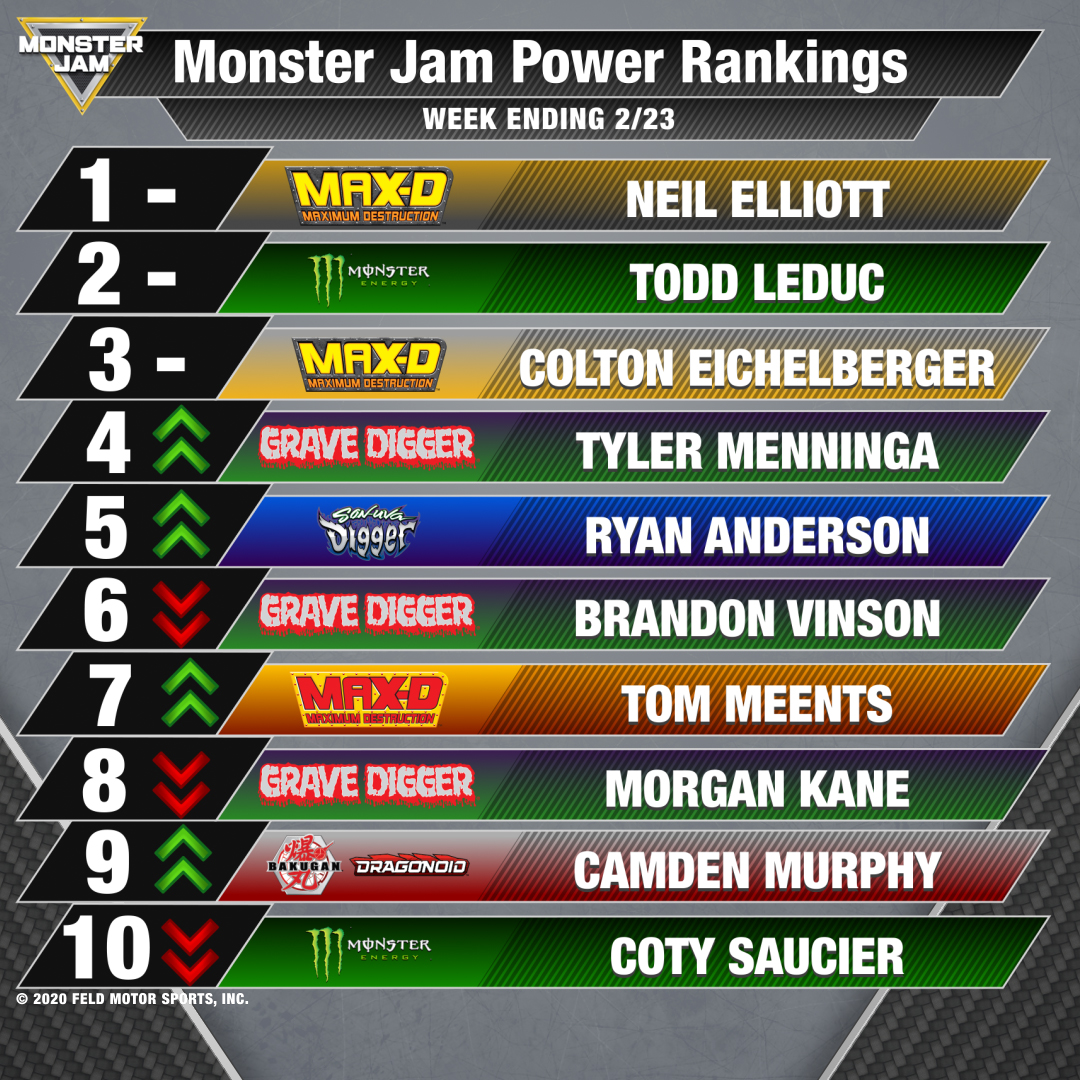 As the Road to Monster Jam World Finals XXI in Orlando on May 2-3 completes another week, Neil Elliott continues to hold the top spot in the Monster Jam Power Rankings.

Elliott (Max-D™) claimed second in the Saturday Miami event and then worked into a three-way tie for the Event Championship on Sunday, losing the tiebreaker due to the lowest Freestyle finish. Elliott claimed his seventh Skills Competition and finished second in another. He notched his first top five in Freestyle in nearly a month. He holds a 27-point lead in Stadium Championship Series Green with four events remaining.

Stadium Championship Series Red leader Todd LeDuc (Monster Energy®) came away from Atlanta with a 45-point lead, thanks to an Event Championship and Skills Competition win on the weekend.  The tour will have a few weeks off with the next action scheduled March 21-22 in Las Vegas. Just three events remain for contenders to prevent a LeDuc series championship.

Triple Threat Series™ Central enjoyed a weekend off, so points leader Colton Eichelberger (Max-D) hangs onto the third spot for the week. Eichelberger is also in the thick of the latest qualifier standings for 2 Wheel Skills, ATV Racing and Speedster competition for World Finals XXI. Getting his first tour championship would mean a busy weekend on May 2-3.

Triple Threat Series East points leader Tyler Menninga (Grave Digger®) moves up in this week’s ratings, after a five-show weekend in Allentown, Pennsylvania. Menninga was able to score multiple wins in most of the competitions and draw closer to a tour championship. With six events remaining, his 51-point lead is far from secure, but this weekend’s effort in Baltimore will go a long way to his future competition plans.

Another competitor to advance in the rankings is Ryan Anderson (Son-uva Digger), who left Miami in second place in Stadium Championship Series Green. Anderson won the Sunday Racing Final…each of his four Racing titles have come at the expense of Morgan Kane (Grave Digger) in 2020. Anderson also recorded his fourth Freestyle win to lead all competitors in that category.

Brandon Vinson (Grave Digger) slips slightly in this week’s Power Rankings. The four shows in Spokane saw rival Tristan England (EarthShaker®) pick up a little momentum, but Vinson still retains a lead with 10 events remaining. Vinson was shut out of racing, but managed at least one win in all other competitions.

The seventh position will go to Stadium Championship Series Yellow points leader Tom Meents (Max-D Fire). Despite being held winless on the weekend in Anaheim, Meents grabbed the top spot in the standings, helped by a pair of top five finishes in Freestyle.

A disappointing Sunday more than offset the successes of Saturday for Morgan Kane (Grave Digger), who slides down for the second straight week. Kane had a stellar Saturday with a Racing win leading to an Event Championship. Sunday saw Kane fall in the Racing final and battle mechanical issues the rest of the day, leading to a disappointing finish outside the top 10 in event points. Kane will hope to bounce back in Jacksonville, where he won Freestyle in his only previous appearance.

The hard-charging Camden Murphy (Bakugan Dragonoid™) has made tremendous strides in the past two weeks, recording 141 points out of a possible 168 and moving into second place in Stadium Championship Series Yellow. Murphy was unbeaten in Racing to claim two titles and his Sunday Event Championship closed the gap on points leader Meents. Murphy sits two points back as he returns to Arlington, where he won Racing and Freestyle in 2019.

The final spot in this week’s ranking goes to Coty Saucier (Monster Energy), who was idle this past weekend. Saucier had a strong start to the season, but he teeters precariously in the current position. His scheduled visit to Arlington will be a first for his career, but many of his career Racing championships have come in a first visit to a location.